Bullshit: You Know It When You See It 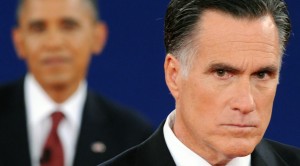 Mitt Romney—Mr. corporations-are people-my-friend—was not the biggest loser last night. Oh, believe me, I enjoyed watching the Mittster bite the electoral dust, and momentarily surfed over to the Faux News channel to watch their derisive alternate reality reduced to what can only be described as Karl Rove v. Faux News-pundit mud wrestling that only Donald Trump would find enlightening.

Mitt Romney’s plastic smile-on-demand was on full display as he gave his concession speech—that same smile he uses when he’s lying about gods, jobs or dogs, or any rhetorical utterance that happens to come slithering out of his mouth, for that matter.

Speaking of electoral losers, Romney’s just the beginning. Racists, bigots, homophobes, Tea Baggers, God, fundamentalist Christians, misogynists, secessionists, dominionists, conspiracy theorists and anyone else with an non-reality based, uncompromising ideology, now have to take a seat on in the back of the modernity bus. Don’t get me wrong. This, in no way, describes the entire Republican party. But for some reason, Karl Rove decided sometime before the mid-term elections that Tea Party extremism was a sure-fire path to the White House, and that faction of epistemically closed insufferables completely took over the party. That, again, turned out to be a losing decision.

Even though Romney, irrationality, and extremism got a good smack down, they weren’t the biggest losers. The biggest loser of the night was Bullshit. That’s right, Bullshit with a capital “B.” Harry G. Frankfurt, Professor of Philosophy emeritus at Princeton wrote a book entitled On Bullshit, a philosophical exposition into the search for a universal theory of bullshit. Here’s the opening paragraph:

“One of the most salient features of our culture is that there is so much bullshit. Everyone knows this. Each of us contributes his share. But we tend to take the situation for granted. Most people are rather confident of their ability to recognize bullshit and to avoid being taken in by it. So the phenomenon has not aroused much deliberate concern, nor attracted much sustained inquiry.”

I think that’s exactly what happened during this year’s presidential election. Romney and the present Republican party pushed the limits of bullshit so far past the normal amount of everyday bullshit we all encounter, ultimately, his bullshit got so deep that it started to interfere with the usual amount of bullshit to which we’ve become accustomed.  That’s when his particular bullshit began to reek above the usual bullshit. Romney anthropomorphized bullshit to the point that he personally personified its essence—furthering Frankfurt’s search for bullshit proper into what will be known hereafter as: Bullshit—at least in my mind.

Sometimes you know it when you see it.