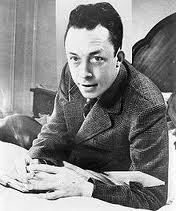 “Considered as artists, we perhaps have no need to interfere in the affairs of the world. But considered as men, yes. The miner who is exploited or shot down, the slaves in the camps, those in the colonies, the legions of persecuted throughout the world—they need all those who can speak to communicate their silence and to keep in touch with them. I have not written, day after day, fighting articles and texts, I have not taken part in the common struggles because I desire the world to be covered with Greek statues and masterpieces. The man who has such a desire does exist in me. Except that he has something better to do in trying to instill life into the creatures of his imagination. But from my first articles to my latest book I have written so much, and perhaps too much, only because I cannot keep from being drawn toward everyday life, toward those, whoever they may be, who are humiliated and debased. They need to hope, and if all keep silent or if they are given a choice between two kinds of humiliation, they will be forever deprived of hope and we with them. It seems to me impossible to endure that idea, nor can he who cannot endure it lie down to sleep in his tower. Not through virtue, as you see, but through a sort of almost organic intolerance, which you feel or do not feel. Indeed, I see many who fail to feel it, but I cannot envy their sleep.”